EATON RAPIDS – It’s a Friday afternoon and Denene Vincent is getting ready for work. She’s milling about her office on the lower level of her rural home that is tucked away on the outskirts of Eaton Rapids.

Her kitchen is a chef’s kitchen. Sharpened knifes hang on the bricked wall behind her for easy access and stainless steel sauce pans are nearby. Cutting boards and ingredients are laid out neatly on the rolling tables in front of her.

Photos on a bulletin board over a small table near the dining room show candid shots of Vincent smiling at the camera with some of the biggest “Food Network” names in the business. Emeril Lagasse, Rachael Ray and Alton Brown are cheek-to-cheek with Vincent in the images.

It’s just another day in the kitchen as Vincent, wearing a frayed, worn baseball cap that reads “Le Chat Gourmet,” grabs a black chef’s jacket, shrugs it over her shoulders and buttons it up.

Class is in session.

Seven “students” wearing matching Hawaiian shirts, each one red and covered in flowers, grab aprons from a hanger on the other side of the kitchen and tie them on. They wash their hands at a sink while Vincent turns on some music — a Jimmy Buffet tune — and everyone gets to work making a Mexican meal Vincent will guide them through and that they will later eat. 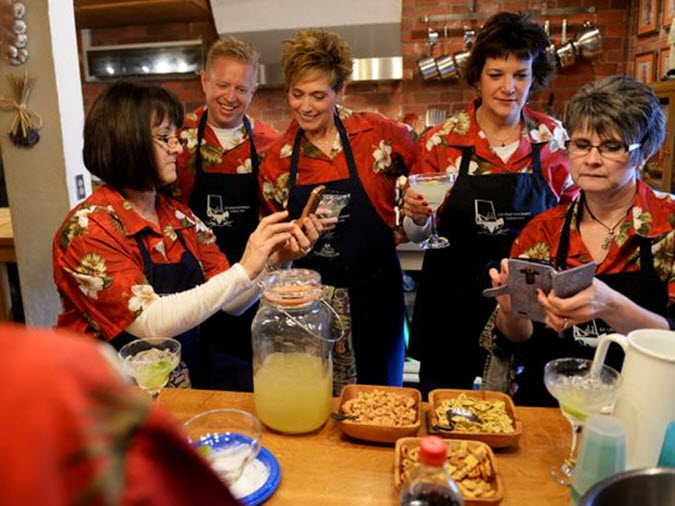 Vincent, 51, has been teaching people to cook and bake in a one-on-one environment in her kitchen for nearly 14 years. It’s a major change from the job she once thrived in as a chef in a hectic kitchen at a privately-owned restaurant, and a 180-degree turn from what she studied in college, art.

But it suits her.

“I guess I should have known from the beginning, because my first words were, “Mmm mmm good,” she said.

There were other indicators that Vincent would take a very personal approach to teaching others how to make and appreciate good food.

Growing up on a 30-acre farm in Leslie her family made “farm-to-table” meals before the concept was popular. The ingredients her mother cooked with came from their garden or their pasture.

Vincent learned to appreciate scratch baking by watching her grandmothers and her mother, Sheri Lee Dunsmore, make cookies, cakes and treats that were always available, always part of the lunches she took to school.

Vincent put herself through Lansing Community College working at a local bakery. A year a half into the program an instructor noted every drawing she turned in depicted food. “Maybe your passion is the culinary arts,” he suggested.

Vincent took the advice to heart. After college she moved to England and six months after taking a job as an art director there she decided to go back to baking. She took an assistant manager position at a bakery and learned how Europeans approach making breads and pastries.
“I just missed that environment, the food environment,” Vincent said. “You’re creating a product that you take great pride in with a group of people you’re together so many hours with that they’re like your extended family. Once I went back I never looked back. That was where I was supposed to be.”

Vincent moved back to Michigan a few years later and eventually ended up in the kitchen at The English Inn in Eaton Rapids. She loved it there and still talks about the job with a smile on her face.

“I loved, loved, loved what I did,” Vincent said. “Working on the front of the line in a restaurant there’s this camaraderie and an energy. Chefs will compare it to a dance and it truly is because you already know what the person next to you or even two down from you is going to do before they move. You’re so tight. At the end of the night it’s all high-fives and fist bumps.”

Then an injury forced Vincent to consider a plan B. She struggled with chronic pain for a few years after, and said it was Julia Child’s late career start — she wrote her first cookbook at age 50 — that inspired her to open Le Chat Gourmet. “She was 36 when she started cooking,” Vincent said. “It was like an epiphany for me. It was like, ‘What am I worried about?'”

Vincent can’t remember what she made during the first class she taught as a private instructor but what she felt while doing it has never left.
“It was like, ‘This is it,'” she said. “It was so cool. I was taking all my years of knowledge and sharing with these people what food means to me.”

Vincent said her business opened during the “first wave” of popularity that The Food Network and celebrity chefs brought to cooking instruction. “Cooking became cool,” she said.

Le Chat Gourmet offers variety — instruction for adults and kids in how to make everything from pasta, crab fritters and tapas to bread and cannolis. There are also workshops on knife techniques and plate presentation. Most cost anywhere between $85 and $110 per person and some are sold out as much as a month in advance.

Ronalee Polad learned how to make everything from macaroons and pastries to the perfect steak in Vincent’s classes and workshops. The retired state employee, who lives in Charlotte, has taken class after class at Le Chat Gourmet. She said she never tires of the instruction. Sweet shallot tarts and a “light and airy” lemon cake are among Polad’s favorite recipes Vincent has shared. “I don’t mind paying for good quality food,” Polad said. “She makes it fun, she makes it easy and guides you through it. She gives you all the tips you need to make it the best way.”

Then there are the annual trips Vincent offers, guided week-long “culinary vacations” to Provence and Tuscany that cost around $3,500. The trips offer a small group of “students” an up-close and personal look at wineries and restaurants owned by Vincent’s friends. Polad has taken two trips to Europe with Vincent. “She knows people everywhere,” she said. “She takes you to places I don’t think the normal tourist would know about or go to. And the best part of the trip is that she cooks for you.”

Vincent said the home-based business allows her to be completely creative and to focus on using Michigan-made ingredients. It’s also been a satisfying second career. “It’s all about having fun,” she said. “At the end of the class if you get cooks who leave feeling excited, great, but if you get people leaving who don’t cook saying ‘Oh my gosh, you make me want to go home and get in my kitchen,’ you’ve empowered them. You’ve taught them techniques and life skills they didn’t have before. It takes some of that intimidation away. Ownership is such a huge part of it.”

Want to take a class?
Denene Vincent’s home-based private cooking school, Le Chat Gourmet, is located at 11874 Bunker Hwy. in Eaton Rapids.
Sign up for upcoming classes and workshops on-line at www.lechatgourmet.com or by phone at 663-7322.