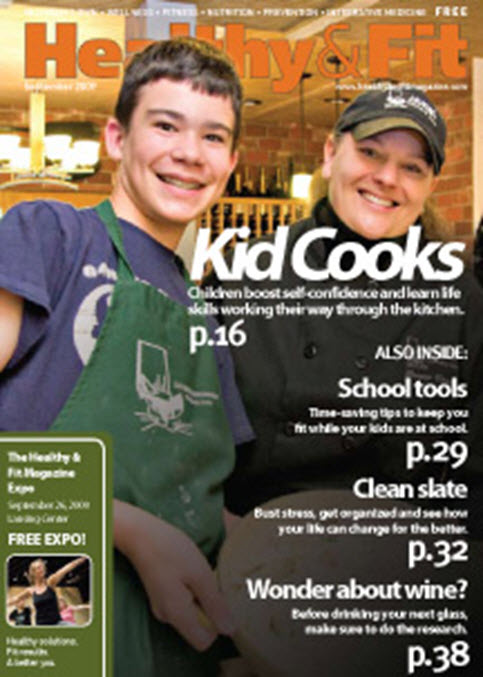 Involving kids in the kitchen has many benefits: It’s fun for all, provides a variety of learning opportunities, improves cognitive and motor skills and boosts self-confidence. Cooking classes are one way to introduce kids and teens to the joys of cooking. Healthy & Fit Magazine visited Le Chat Gourmet’s Kids Summer Cooking Day Camp in Eaton Rapids to see the kids in action.
The air of the Tuscan-style professional kitchen is filled with the savory aroma of chicken, fresh bread, basil and garlic; and also the voices of 13 young cooks as they collaborate in teams, preparing the recipes they developed for the last day of the cooking camp: the much anticipated cook-off a la Food Network’s Iron Chef.
The five-day hands-on cooking camp for ages 8-16 is an introduction to basic cooking skills, a variety of cuisines and plate presentation. Throughout the week, students prepared dishes from Italy, France, Greece and Germany. “We’re having lots of fun,” says Taylor Spann, age 10 from Baltimore, Maryland. “We planned this ourselves. We decided to do international foods and the Iron Chef. It’s so cool.” One of the girls hums happily to herself as she works at the butcher block tables alongside the others.
To prepare for the cook-off, the students were divided into three teams. Each team planned a menu incorporating the secret ingredient, Michigan-made part-skim mozzarella cheese, and drew a picture of the plate presentation. Spann and team members Isabell Ausel, 8, and Rachel Morgan, 8, both from Eaton Rapids, and Tori Schumacher, 10, from Battle Creek, were busy making bowtie pasta with fresh herb mozzarella sauce, ciabatta bread with cheese butter, and baked mozzarella balls garnished with the tiny purple flowers from oregano plants. All herbs are grown in Le Chat Gourmet’s organic gardens.
Each team ceremoniously serve the judges and describe the dishes they prepared, including ingredients, cooking methods and garnishes. As the judges taste and rate each dish for flavor, originality, presentation, and cleanliness of work area, the students watch every movement and expression, attempting to discern the judges’ favorite. Kevin Alverson, 13, and Cameron West, 14, both of DeWitt, Chris Osburn, 9, of Albion, and Catie Boulanger, 13, won the competition with Italian Oven-Baked Chicken Mozzarella (their rendition of Chicken Mozzarella II) over Penne Pasta with Fresh Garden Basil Marinara Sauce.
Several of the students are repeat visitors to Le Chat Gourmet. Chris Osburn attended the kids cooking camp for the first time last summer. When Chris’s mom, Barb, discovered that the kids would learn cooking skills including reading recipes, measuring and kitchen safety, she registered her son right away.
“I think it’s important that Chris learns to cook and I like the idea of him being safe in the kitchen,” says Osburn. “He really enjoys it. He gets to try new and different things here—things we don’t usually have at home.” Chris and his mom made a few of the recipes from last summer’s camp at home including a Texas sheet cake for Chris’ swim banquet.
Denene Vincent, founder and executive chef of Le Chat Gourmet (lechatgourmet.com), has offered the Kids Summer Cooking Day Camp for five years. The July camp sold out the past two summers, so another camp was added in August. Vincent’s philosophy about teaching kids to cook focuses on fun and function. “In the end, it needs to be fun,” says Vincent. “If it isn’t fun, the kids won’t want to do it.”
During the camp, students learn about kitchen etiquette, safety and team work. Vincent has strict rules about the Wüsthof knives that hang by magnetic holders on the red brick wall. “No knives come off the wall without supervision,” Vincent reminds the kids. She explains proper knife use with a story about keeping the bunny safe. “Your thumb is the bunny. Keep all your other fingers around the bunny, so the bunny is in the hole.”
Vincent believes it’s important to give kids ownership in the kitchen: To let them do things themselves and not force them to do or eat something they don’t want to. That way, the kids will be more open-minded. “If they don’t like something, that’s fine,” says Vincent, “It’s good for kids to realize that not everyone likes everything.”
Kids learn a lot by cooking.
“Cooking camp is the entire core school curriculum in one program,” says Vincent, “Mathematics, reading, social skills, research, writing, artistic expression and physical fitness. But, for the kids, it’s just fun.”
And at the end of the day, all students were winners. Chef Vincent tells the students she is proud of their teamwork, creativity and accomplishments. Each student receives a cloth grocery bag filled with gourmet items: a cat-shaped cookie cutter (Le Chat is French for “the cat”), an avocado scoop, ground cinnamon, sea salt, an issue of Saveur magazine, and a cutting board. “I needed another cutting board!” says one of the boys with a big smile of satisfaction.

Karen Giles-Smith, MS, RD, is a registered dietitian and freelance writer based in Mason, Michigan: www.TheWellnessWriter.com